25 years later: Where are they now? 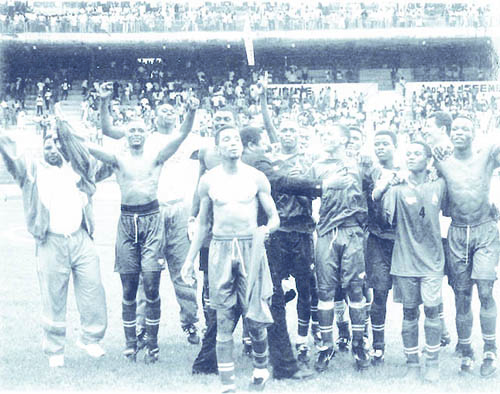 …After breaking the Afcon jinx, the Class of 98 turns 25 next month

ON February 8, the famous Brave Warriors squad that broke the jinx and took the country to its first ever appearance at the 1998 Africa Cup of Nations (AFCON) in Burkina Faso, will be turning 25.

The Brave Warriors squad which comprised mostly of amateur footballers, played featured in group consisting of an Ivory Coast team that had in its ranks 12 players plying their trade in Europe.

The Brave Warriors went on to lose the match 4-3, after initially trailing 3-0.

The other matches which the class of 98 played were a 3-all draw against Angola before a 4-1 drubbing at the hands of South Africa.

After their Afcon exploits in Burkina Faso, the Brave Warriors went on to qualify for the 2008 Afcon in Ghana and the 2019 Afcon in Egypt.

Although the 1998 class failed to win a single match, it is regarded by many football fans as arguably the best-ever Brave Warriors team.

For the most part , some  of the Class of 1998 legends are still involved in the game, while others went on to become businessman and others are employed in various sectors.

Fillemon Ronny Kanalelo (51)was the first choice ‘keeper the whole tournament and has played for Eleven Arrows, Blue Waters and Black Africa , before moving to South African powerhouse, Mamelodi Sundowns  and is now University of Namibia Football Club (Unam FC) coach and also serves as assistant coach of the Brave Warriors.

Petrus ‘Dax’ Andjamba (49) was the second choice goalkeeper and he played six times for the country and played local football for lower division outfit, African Blizzards, before playing for Tigers and ending his playing career at another local side, Young Ones.

Since retiring from football, Andjamba has worked as a Health, Safety and Environmental wellness officer, for NamPower and is also the coach of NamPower soccer team.

Denzyl Bruwer (47) was the third choice goalie and became first choice after the 1998 AFCON. During his playing days, he played Civics and Young Ones before playing professional football in South Africa for Ajax Cape Town, Avendale Athletico, African Wanderers,  Wits University FC and  Bay United F.C .

He is currently in the transport business and at the same time, is also involved in the youth coaching development in Swakopmund.

Bimbo Tjihero (54) captained of the Afcon side and played club football for local club, Liverpool and is currently a full-time employee at the Namibia Broadcasting Corporation (NBC) as the head of sales and is also a farmer.

Petrus Orlando Haraseb (54) also played for Liverpool, Orlando Pirates, Chief Santos and Young Ones and is currently a tour guide and also a mentor, assessor, moderator and auditor at the Namibian Training Authority.

Phillip Gariseb (49) who turned out for Life Fighters and African Stars was a key figure in the defence.

He is currently employed as a general worker at the Municipality of Otjiwarongo and is set to join Life Fighters’ coaching department.