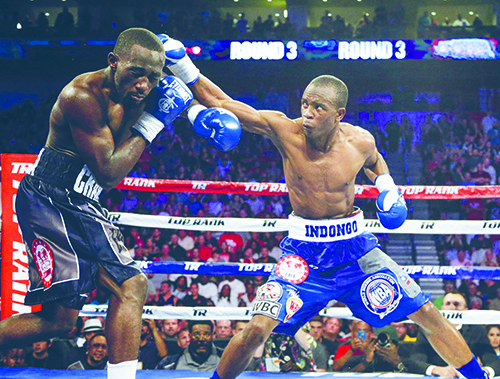 FORMER triple boxing world champion, Julius ‘Blue Machine’ Indongo says he only has two or three fights left in him before retiring from the spot he is adore so much.

He however did not defend his IBO after it was stripped off him following his former promotion’s failure to pay the sanction fees.

The boxer, who turns 40 on February 12, hails from Ongwediva in the Oshana region, told Confidente that his body is no longer the same as it was back in the day.

He could however not tell when exactly he was going to retire, but said it was likely this year or next year depending on the number of fights he would master during the year.

Indongo first took up boxing in 2002, after he won the amateur Namibian National Championships and he never looked backwards after, going on to dominate the international boxing fratenity.

However, Indongo was struck by tuberculosis, which interrupted his career for two-years and after recovering, he qualified to represent the country at the 2008 Olympic Games in Beijing, China and right before his first fight, calamity struck again after he broke his right hand, but he decided to fight regardless and was easily out maneuvered by Australian, Anthony Little.

“This year my aim is to relocate to Ongwediva because Ongwediva is my home town. Now I just want to fight for fun as I am in the twilight of my boxing career.  I am turning 40 this year and will only be traveling if I am invited for a fight, if I win, I win but I will not be going to fights to win like in the past. I keep on training but training is no longer the same because the body is tired and cannot do the same rigorous training regime as in the past.

“ But I think I will have two or three fights before I retire,” Indongo said, after holding his first Indongo Boxing and Road competition that was held in Ongwediva over the festive season.