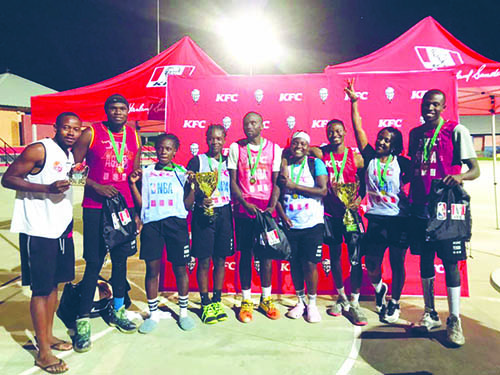 AFTER successfully hosting the KFC National 3×3 Championships at the United Nations (UN) Plaza in Katutura last month, KFC Namibia is considering entering into a long term partnership with the Namibia Basketball Federation (NBF).

Benefits of such an agreement will be huge for NBF and developmental signs are already showing after KFC Namibia rebranded the basketball courts in Soweto.

KFC Namibia’s partnership is part of National Basketball Association (NBA) Africa and KFC Africa’s collaboration on a number of promotions and activations for basketball fans across eight countries on the continent, such as Botswana, Ghana, Ivory Coast, Kenya, Namibia, Nigeria, Senegal and Tanzania.

However, KFC Namibia remains mum on whether they will be funding local basketball league activities as they only funded the 3×3 tournament that was contested by regional teams in both men and women’s divisions.

Basketball has over the years been in the doldrums due to lack of funding that has hindered growth of the sport that used to be one of the most popular codes in the country in the late 90s and early 2000s.

Speaking to Confidente Sports this week, KFC Namibia’ Marketing Coordinator, Geraldo Bok said the aim of the franchise partnering with basketball is to revive the sport in all corners of the country, following the hosting of the KFC NAMIBIA Primary School Basketball League in Ongwediva in October last year.