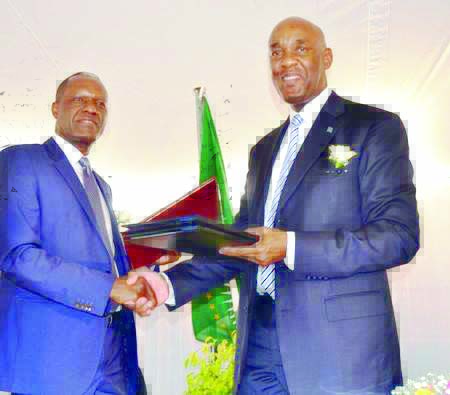 THE Minister of Works and Transport, John Mutorwa and his Botswana counterpart, Eric Molale (Minister of Transport and Public Works), recently signed a Memorandum of Understanding (MoU) which reaffirmed their governments’ commitment to fast-track the development of the Trans-Kalahari Railway project that aims to link the two countries.

The two ministers agreed to speed up the implementation of the project, in order to boost trade and tourism, while contributing to employment creation in both countries.

The agreement includes capacitating the project as a matter of urgency and also approved the project’s operational budget, establish a technical team from TransNamib and Botswana Railways.

Estimated to cover 1 447 kilometers, the project was conceived in 2010 with the commissioning of a feasibility study and bilateral agreement signed in 2014.

It is planned to run from Mmamabula, Rasesa, towards Phuduhudu, following the Trans-Kalahari Highway through Mamuno border into Namibia at Bueitepos boarder post, into Gobabis, through Omitara to Okahandja and to Walvis Bay, which will be its final destination.

“TransNamib will cooperate with Botswana Railways to grow freight volumes between Walvis Bay and Gobabis to support imports and exports for Botswana,” reads a statement from the Ministry of Works and Transport.